Something like 2 years ago I bought Bosch GCM 12 GDL compound miter saw. Through that time I have worked a lot with this saw and I've gathered enough experience to give you some comments on it. 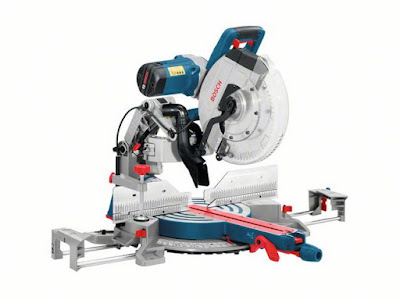 You can find technical data on Bosch website so I will not talk about that. Also if you search through internet like Youtube you will find a few interesting films on that saw. I don't want to copy that info. What I want to give you is my personal opinion of the Bosch GCM 12 GDL.

Before I go any further to what I like and what I don't like about the product, I must mention two things.
First - Bosch sells this saw as portable machine which you can take to job site. Let me say this is not exactly true. The weight well over 30 kg and the size of the saw successfully prevent it from being portable. I moved it around the workshop couple of times before I fixed it to the base and believe me - it is HEAVY. Now I use the saw as permanently fixed - stationary machine and I do not carry it out of the workshop so for me the weight is not as important. But you should take it into consideration if you plan to buy the Bosch GCM 12 GDL as job site power tool.
Second thing which is quite important but doesn't influence day-to-day use is the fact that at the very beginning, before you start using the saw, you need to spend decent couple of hours to tune all settings like angular measure, right angle between blade and the base, laser and so on. Straight out-of-the-box they are not set correctly. But when you spend the time and set all those features, you can easily work without having to check them.

So let's start with the advantages of the machine:

1. First thing which I like the most and have used that quite a lot is the material height capacity - over 100mm which is one of the largest in the market.. You are able to cut either thick pieces of wood like some thick pillars for your garden project or couple of thinner boards at once to get exactly the same length. This is really very useful. 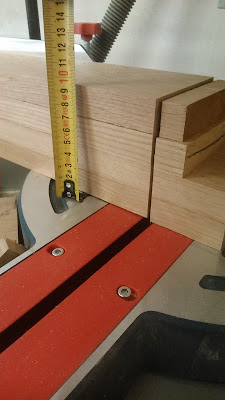 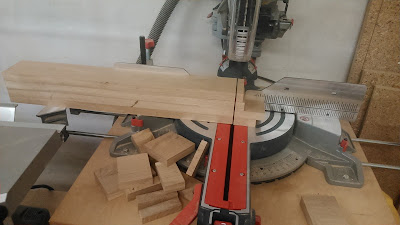 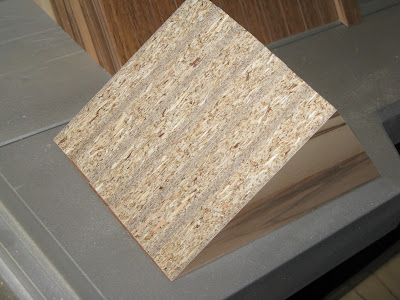 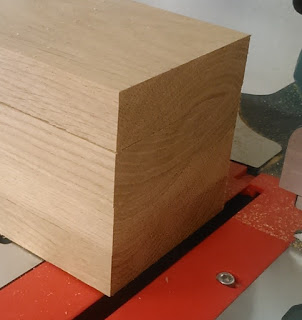 3. Range of miter angles - most of the miter saws have range of +/- 45deg. Here you can cut up to 60deg. In some occasions it is very useful as you can make your cuts just on one machine without having to reach for other power tools. 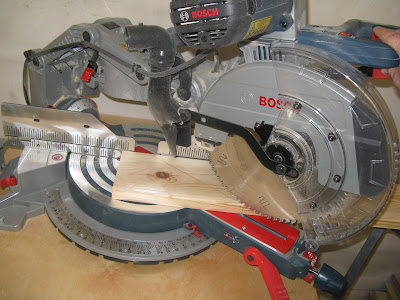 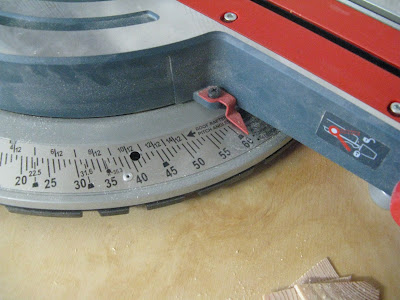 4. Articulated arm - Bosch says it "glides" and I can really agree with it. When cutting back and forth with the blade you  do not feel any resistance - which I felt with couple of "classic" sliding miter saws. Also this arm is very rigid and the cutting head (blade, motor, handle, etc) doesn't dive when it's far ahead, which is also very popular with "classic" design.
Also the arm gives you another "side-effect" advantage. You can position the saw close to a wall without having to keep space for slides in the back. So taking it into consideration, although Bosch GCM 12 GDL is significantly bigger than my previous miter saw, it takes less space in my workshop. 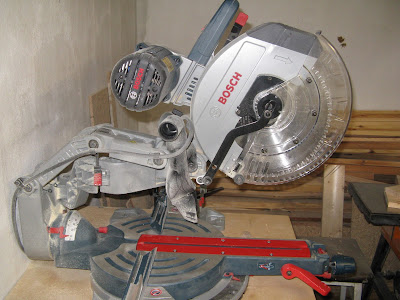 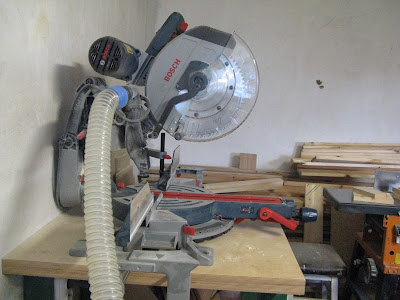 5. Support of material to both sides. You can move the support to max span of over 100cm. This is sufficient for many projects. 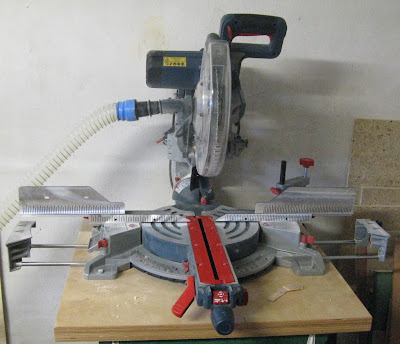 6. Setting of miter cut - you can do it easily with one hand. Most popular angles are already predefined so you can quickly find suitable position.

Now let's jump to what I DO NOT like:

1. The most important thing is dust collection - this is complete crap. From day 1 I wondered how Bosch could release something so terribly wrong to the market.
The original rubber snout is far too small and placed too high to catch any dust or debris from the blade during most of the cuts. You end up with dust flying to the back of your miter saw and sitting on the lower inside of articulated arm. And you must remember that the arm has plenty of ribs and therefore many places to gather dust. Luckily the dust doesn't influence arm's performance. 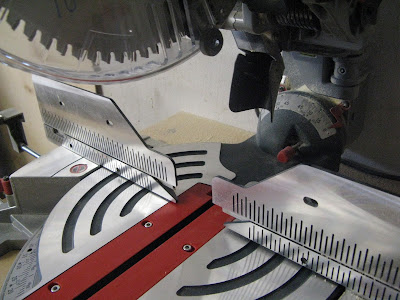 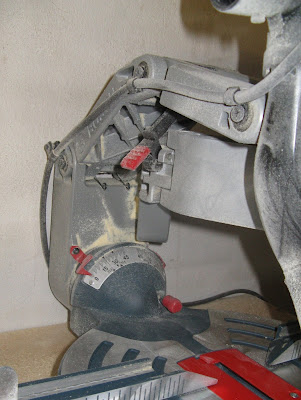 Then is the plastic pipe going up - even when I connected dust extraction (vacuum or dust extractor) it was not very efficient. Also, couple of days after I connected vacuum hose, the pipe just broke away. 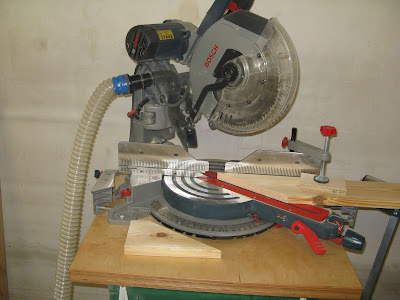 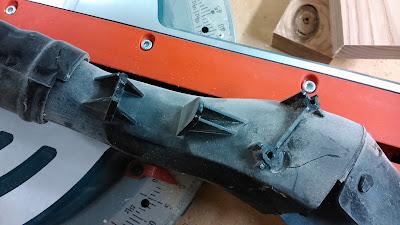 For me - the miter saw could be supplied without any dust extraction provision at all and the result would be exactly the same. 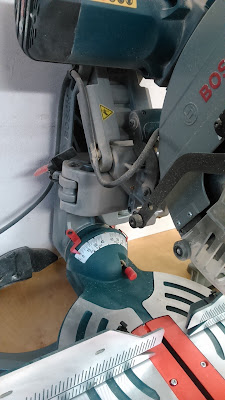 2. Clamp - OK, when it's tightened it holds the material really well. But because this is screw-type it takes some time to fix the material. Not practical during repetitive or fast cutting. That is why I use it extremely rarely. 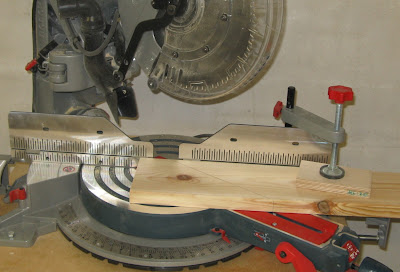 3. Bevel angle adjustment - the weight of whole arm makes it quite difficult to precisely set the demanded bevel angle. You really need to use both hands to do it and still it's far from comfortable.

Generally I think the Bosch GCM 12 GDL miter saw as a whole is very good machine - it makes all demanded cuts very well. It does what I ask it to and what I bought it for.

But when you ask me if I would buy it again - the answer is NO.
Not because of the Bosch GDL 12 GCM itself but because of totality of work I do on my projects. I have done (and will do even more) outside jobs as well. So to cut material to length on job site I needed smaller portable miter saw which I had to borrow to take it with me. Taking it into consideration I would prefer to pay that 25-30% more and buy Festool Kapex which with its 21,5 kg weight is much easier to move around and also has better dust extraction. I would even accept slightly lower material height capacity.
Autor: Unknown o 22:09